Quantifying Beauty in Your Product

I presented at last years ProductCamp Atlanta in an ad hoc manner, using a recent, really fantastic article I had read regarding the Minimum Lovable Product (MLP). If you haven't read this article I'd recommend that you do and specifically, how you can adopt the ideas into your own products. This article is my first attempt to expand on my thinking around the MLP idea - specifically, the idea of quantifying beauty and good design to achieve that MLP.


First a short summary - the basic idea around MLP is to provide at least one feature that a user will really like as part of every release. Specifically the article linked above is for the start-up and and how by using a "Wow" feature you can garner fans of the application, thus creating users-as-evangilists who will spread-the-word for obvious results - putting that aside I think it's a great concept to put into everyday product planning. But to do this I think it's important to take into consideration good design and what quantifies a Lovable feature. That got me thinking about how we, as both users and providers of products, qualify or quantify a feature as useful, significant, well-designed or even beautiful. What gets us thinking "Wow! This is an awesome product!"

I think there are ways of measuring the concepts of usefulness, significance and good-design - however that last which includes the definition of beauty, is the tough nut to crack. How does one quantify beauty? Isn't that in the eye of the beholder? How do some product Management professionals consistently create beautiful products while others don't? Is it a knack, simple luck or something more? To answer these questions I'm turning to one of the great product designers of the 20th century, design icon Alessi and designer Alberto Alessi.


Alberto Alessi is the eldest son of Carlo Alessi, who joined the Alessi design firm in the 70's. If you don't know anything about Alessi as a company then you haven't been paying attention - this venerable Italian design company hired some of the most prominent architects and designers of the 20's century and infused their designs into useful, yet beautiful objects and gadgets for the home and kitchen. They have been extremely successful in marrying useful objects with beautiful design. I focus on Alberto as he was recently interviewed by the Wall Street Journal and I found something in there that relates to this discussion - the formula he uses to determine if a product will be a best seller - and I thought this might be useful to help us quantify that MLP!

From the  WSJ article (May 19, 2016):
"I know a product will be a best seller when: it receives a good score in my formula that rates prototypes on four parameters. First SMI - sensation, memory, imagination. This is what people mean when they say something is beautiful. Second is CL, communication language, which is the ability to communicate status or values. And the last two parameters are function and price."


Taking this statement at face value and converting it to "Knowing a Product will be Successful", lets make the assumption that the four components are equally weighted. If so, then function and price are only fifty percent of the equation and unfortunately, those tend to be the two factors that we as product managers seem to focus our efforts upon - providing function that customers will be willing to buy, at a price point that makes the company money and converts the user into a customer. This might explain why some products just fail to be adopted or capture much usage, even when the feature is good and the price is reasonable - I'm sure all of us have experienced this or if you haven't, at some point you will. Also, these are purely my own observations and interpretations of these component topics - basically the way I think about them and how they apply to the product management process and role in software development so please take them as opinions and observations. 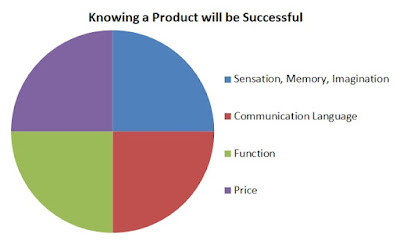 Knowing a Product will be Successful


SMI - sensation, memory, imagination or the notion of beauty
I like this breakdown because I think it helps to visualize they why of beauty. It may not encapsulate the entire notion and perhaps nothing does, but as product management professionals we tend to work better and become more successful using things that are measurable. At this point I'm going to take some guesses at what Alessi means by these three components, or at least project how I think these three bits are used to define beauty or fine design. 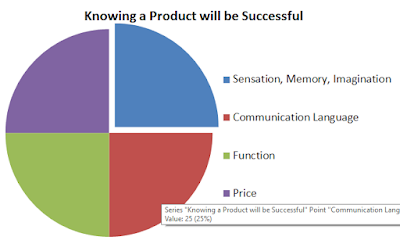 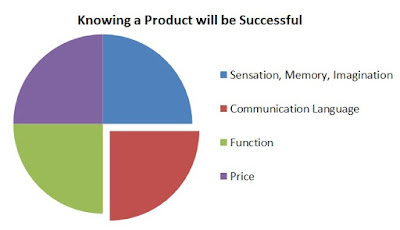 CL -  communication language, the ability to communicate status or values.
With this topic we get into the conversation of why - why use the product or what problem does it solve and how does that come across to the user? Also, is there any intrinsic value to the use of a brand to increase demand or value? If so, how are these factors communicated - in hard-goods the Louis Vuitton brand will imply a certain value and exclusivity - does that really translate into quality? If so, how does this translate into software? It's my opinion that brands don't equate to better software so the comparison to hard-goods fails a bit. Instead I think the topic of Communication Language has more to do with delivery and the way a product solves a problem. I also think that in good software design this often falls to the idea of simplicity and explicit use. Let me explain.

One of the reasons that mobile apps are so successful is due not to the advanced features offered or to the breadth of features, but rather to the simplicity of what problem is being fixed or addressed. Very simple apps that do one or two things get adopted quickly and are used frequently. The best apps are recreated by the smart-phone manufacturers and incorporated into the basic phone functions. A good example is how a smart phone developed from the consolidation of many devices into one - carry a digital camera, a palm device and a phone? How about one device for all three? Oh and make it very simple and reliable to use and you have that first generation smart phone. Add in SMI as defined above and you have the iPhone. It's the simplicity of use that ultimately wins and not the sophistication of features through complexity. Getting back to Communication Language - the simpler the feature, the easier it is to communicate its value.

So how to put these ideas all together and why? First an observation - most of the successful product management professionals I know marry two different disciplines - the analytical side of tactical and strategic execution and the visionary side of choosing good approaches to problem solving. The former is much more a left-brain function of determining the best, formulaic way to solve a problem - your basic logical thinking. The latter is more of a right-brain function of coming up with new patterns to invent different ways to approach a problem or seeing that a problem is an opportunity to be creative in problem solving. I think that most product managers tend to be right in the middle of these two disciplines at a fairly good balance while most analyst types are towards the left-brain side.

I'm sure all of us have worked with really good product, requirements or business analysts who were quite competent in their jobs, but for some reason really fail when they attempt the leap to product management. I think that those that can't quite make it into the larger context of product management (strategy, roadmaps, big picture thinking, inventiveness, out-of-the-box thinking, just more context) are a bit overly focused on execution and tactics - when they are asked to be more inventive they have a hard time transitioning. Note that it's not to say that they are inferior in any way - it's just an observation and why I think using this method offered up by Alessi can be useful, by narrowing down the elements until they are more manageable and quantifiable, those of us who are more left-brain can transition into a more balanced role - or at minimum reduce the risk while we get used to a role with more context. 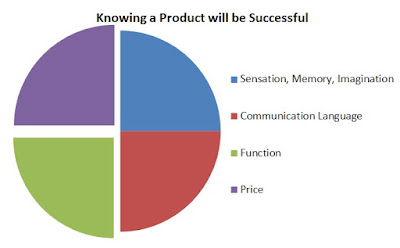 Finally, on Function and Price
There's quite a bit already written about Function and Price so forgive me if I gloss over this a bit. To really understand this well I'd recommend the Pragmatic Marketing courses on Foundation, Focus, Build and Price. I think the most important thing to recognize is that they are only fifty percent of the entire equation.

So what to do with all this information? I think that a good starting point is first recognizing that there is more to product design than solving a problem. Second, if you place this chart on a wall when considering your product's attributes you can use it as a bit of a check. Most of us will already have "Function" and maybe "Price" determined, but how about SMI and CL? If we're lucky enough to have a designer onboard he may have contributed to Sensation and Memory, but how about Imagination? Is there something there that is compelling? Can you apply "cool" or even "nifty" to the product description? If "Cool" is there, do you also have a grade for Sensation and Memory or is that where it falls flat? Each of the SMI score components should be weighted equally and combined make up 25% of the overall score. The same exercise should be applied to all four quadrants and from the discussion you will see potential pitfalls, risks or where you should be focusing your attention.

Its not to say that this method is the best - I'd welcome comments about how you each address the idea of achieving success. I just wanted to start the discussion and frankly I like this approach. Comments?